Link to this Vimeo video: https://vimeo.com/81404422
Link to 'private' screen and downloadable video: http://bitly.com/IXNiNK
Link to Youtube version of this video: http://youtu.be/LkBWP6tlQBE
Posted by Fang at 11:00 PM No comments:


Video slideshow of Gerard Brown photographs from the 2013 Vintage Cape Horn Rally.
Posted by Fang at 8:00 AM No comments:

Life is but a dream

When Bill Shields casually mentioned a South American rally and followed through with entry forms we really did not know what was in store.  This is evidenced by our baggage… lawn chairs, table and cloth, candles (battery powered) and abundant attire for evenings. Also the navigator needed her makeup and five pairs of shoes, none suitable for Antarctic exploration.

Much time and effort later we found ourselves in a Buenos Aires basement loaded down with instructions. cautions, gadgets, tags, a briefcase full of strange charts, route books, score pads and a medical kit suitable for a small surgery. Saline drip?

OK. We are last to start, just follow somebody. When this proved to be an unsuitable strategy your navigator got to work, which was timely since before long we were first to start in the morning.

Day Two and our first real race course. We had never previously tried turning Fang at speed since he basically doesn't, but Chuck muscled him around with lots of screeching and tilting to a good result.

Our new strategy. Leave at our exact assigned minute in the morning, drive real fast to next check point, wait nearby and roll into position on time as required. Do not get lost, break or run out of fuel. Times on controlled sections, including race circuits and select sections of gravel, are where the game can be won or lost. On the race circuits only seconds are at stake, but arriving even one second late on the timed road courses earns an automatic one minute penalty.

The starting order varied. Much of the time we started first and never saw anyone except the timing officials and the newer Mercedes and Mustangs in the modern class. Chuck simply drove full out constantly. Fang endured, I shouted directions and Monkey hung on. Cars were sent out one minute apart so it was prudent not to start behind a slower car, especially on a single track.

Fang's suspension died half way through the rally. Henceforth Chuck spent most evenings on the ground in icy winds with stiff hands and hope in his heart. So many times it seemed like we were done, but the road was lined with helping hands and miracles. I should have know after forty years with Chuck that we would never give up.

Everyone welcomed the crazy racers from Washington state. All were gracious and encouraging. The atmosphere, even in adversity, freezing cold, endless wind. broken this and that, ruptures, punctures, leaks and spills was of one big holiday.


Posted by ducktower at 4:29 PM No comments:

Posted by ducktower at 12:00 PM No comments:

Final days not lacking in drama. No, not at all. The 16 km gravel road between the borders of Argentina and Chile on our route is called "No Man's Land". Certainly no man maintains it. We pulled onto Rio Grande in disrepair with one hour to get to race track. An angel we had met in Buenos Aires, Carlos Menendezbehety, appeared with a full on suspension shop just around the corner.  A pack of wild mechanics patched us together, the angel led us to track with minutes to spare and we held our first position. Back into the shop from 5 to 11PM. After a delicious king crab feast we picked up Fang. These guys are the real deal, racers and artists. The shop was closed, the owner sat waiting in the dark. He would not allow us to pay him at all. We gave his sweet guard perro a steak instead. Now midnight Chuck and seemingly half Rio Grande needed fuel. Lines blocks long. At this point Fang evidenced a fit of wheezing and backfiring which had our worried driver outside at 4:30AM changing everything possible. Did I mention cold? Very.

This morning we reran the track in a Snowstorm! Slipping and sliding in an inch of snow with a clever go cart course inserted on the straight, we opted to just forget speed and stay on the track.
Now for a fun filled blizzard on 80 km of mixed deep mud, snow, hail, and cattle guards. Throw in a two minute flat out medal run and we are rallying for sure.
When we got to the Tarmac, hours later, Carlos and his pretty wife Alicia, were waiting to cheer us on. Feeling cocky a bit too soon, the snow intensified, the fog rolled in and a scary mountain pass appeared.
Not until the Clerk of the Course, Kim Bannister flagged us down with a bottle of champagne, did we relax. Just then Fang's fan belt let out a frozen howl.
What a ride. 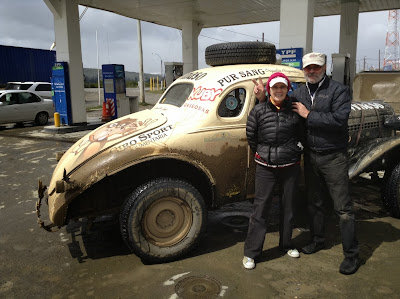 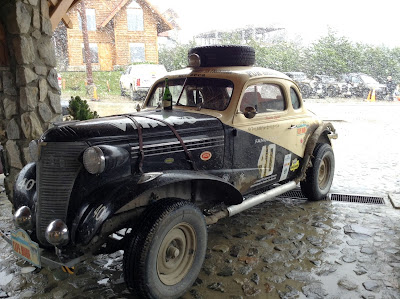 Chuck notes:  Ran the track in snow.... Wow.... Engine backfiring ... Think a jet is partially clogged. wind so high, 40 K plus with snow and cold, could not even open hood.  Pressed on and gave up 20 seconds...Had enough left over and made the Last TC with seconds to spare...Huge mountain pass to climb in drifting snow and fog... So thick no photos of finish could be taken.  More like the movie the great race, times two! 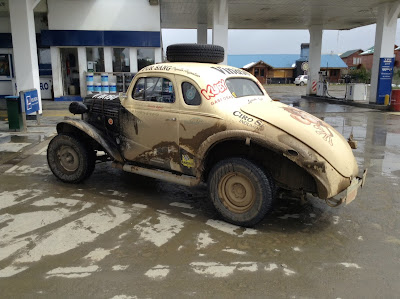 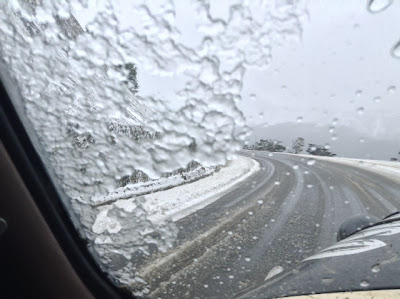 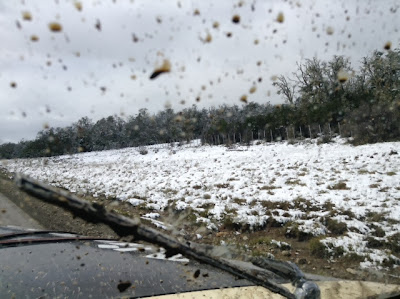 More as soon as communication connections allow.
Posted by ducktower at 10:07 AM 5 comments: